Release of third platform based on the company’s XCVI FPGA engine in a standalone mixer with 64 channels, 42 configurable buses, twin high-definition touchscreens and more. 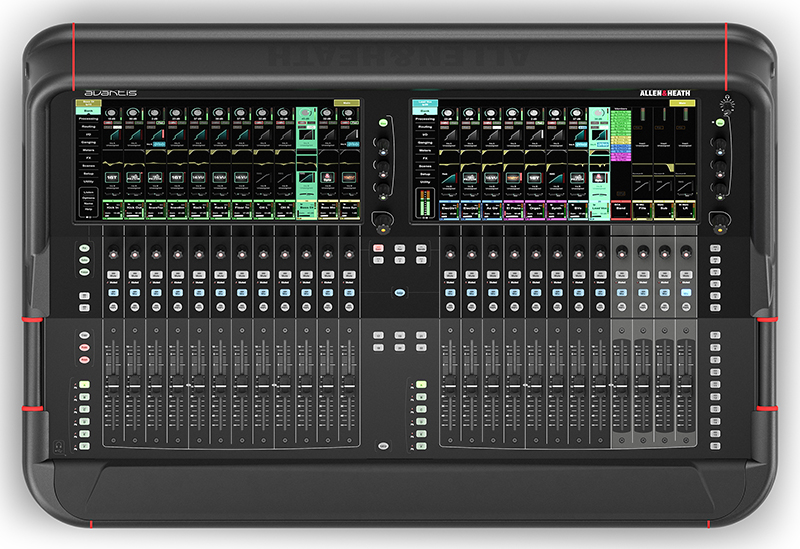 Encased in an alloy shell and tubular frame, the control surface is centered on the two 1080p HD touchscreens and their corresponding rotary controls.

“Having two touchscreens isn’t a new concept, but we realized we could use it to unlock exciting new possibilities, which led us to develop Continuity UI, which allows engineers – not the mixer – to decide how they’d like to work,” explains Andy Bell, R&D director for Allen & Heath.

“For example,” he continues, “an engineer can work gains and pans on the rotaries, then at the touch of a soft key switch to EQ or dynamics across the whole strip. The console also provides a highly configurable FastGrab tab on the right-hand side of each screen, offering another way to quickly and easily access control of aux sends, EQ, compressor and FX on the currently selected channel or spot channel.”

Also onboard are 16 DCA groups (with spill functionality) and eight mute groups. Automatic Mic Mixing (AMM) of up to 64 microphone sources can be distributed to 1, 2 or 4 zones, and it’s capable of running in classic gain sharing mode or optionally as a NOM (number of open microphones) algorithm.

While Avantis can be paired with the 48-input/16-output GX4816 audio expander, the new platform is part of the company’s “Everything I/O” ecosystem, meaning that it connects to a wide range of audio expander hardware. The console is also compatible with Allen & Heath’s range of ME personal mixers and IP hardware remote controllers.

The capabilities set doesn’t stop there. Input and output channel processing and parameters can be saved on demand as a user library item for recall in other channels. There’s also the ability to archive these items with show files, and they can be transferred via USB for use with other systems.

There are also facilities to save up to 500 scenes, each of which can be named and accompanied by descriptive text. These can be protected from unwanted changes with scene safes. Even further, a cue list of scenes facilitates a running order of scenes from the master list, and a crossfade adjustable up to 20 seconds is offered for each scene. Recall can be embedded into a scene, with the option to delay the start of the embedded scene recall by up to four minutes.

A talkback facility provides the ability to send to any output mix with on-screen status indication, and there’s the option of enabling talkback latching and high-pass filtering. A signal generator can be used to send a variable level signal – including sine, white noise, pink noise and bandpass noise – to any input and output mix with visual assignment status on screen.

Speaking of visual, the mixer’s metal tubular exo-skeleton makes for a striking aesthetic while keeping weight down to just a bit over 57 pounds. Overall dimensions are compact at 36.1 x 24.7 x 10.6 inches.

“One of the first things you’ll likely notice is that Avantis is not just another dull grey boxy mixer with plastic sides,” notes Jeff Hawley, Allen & Heath USA marketing manager. “Our team was inspired by the sleek curves of the tubular exoskeletons present on modern superbikes – extremely strong, but lightweight.”

Avantis stands to bring an unprecedented amount of power and processing to a mixing console of this footprint and price point, with a level of accessibility and control that rivals consoles costing many times more.